THE BEAGLE ASSOCIATION OF GAUTENG
Search

A merry hound by nature, bred to hunt, mainly by scentwork... 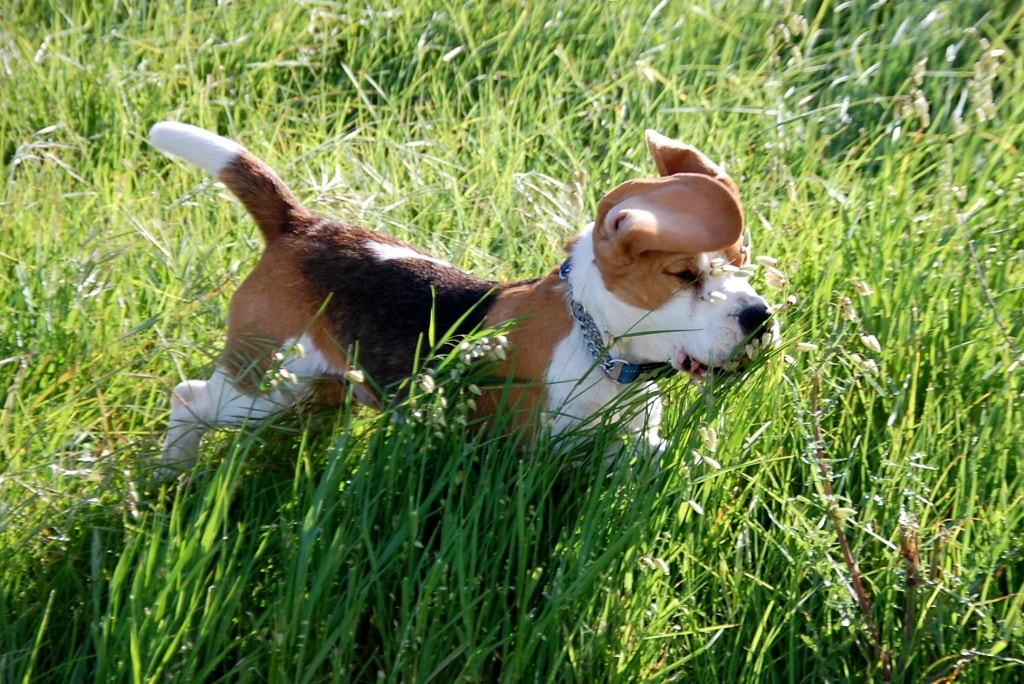 The history of the Beagle (Part 1)

Although the Beagle is generally regarded as a British breed its origin, however obscure, is almost certain to be found outside the British Isles. In the opinion of those who have researched the subject the Beagle has evolved from small hounds used for hunting small game in southern Europe, as opposed to the larger sight-hound used for hunting larger and faster quarry.
Evidence to this effect comes from the Greek author Xenophon born about 433BC who was an enthusiastic follower of hunting and wrote a "Treatise on Hunting" in which he refers to the small hounds which hunt hare and rabbit on foot. The method of hunting used then differs from that today in that the hounds were used to drive the game into nets laid out by the huntsmen. Illustrations on pottery of that period show two types of hounds: the small ones with thick muzzles and long ears, and the much longer legged hound with slim more pointed muzzles and shorter ears.

The development of the Beagle is exclusive to this country, starting with the Romans who acquired the small Greek hounds and brought them to this country for trading and hunting. The Saxons were known to have used them for hunting hare and exempted the from the Forest Laws drawn up by King Canute in 1016. Whether or not there were any hare hunting hounds native to Britain at this time is not certain, but Capt. Otho Paget, described as the "dean of all Beaglers" wrote: "There were, however, in England packs of hounds before the time of the Romans and it is on record that Pwyll, Prince of Wales, a contemporary of King Arthur, had a special breed of white hounds of great excellence." The Normans who were keen hunters brought over some larger  hounds, probably of Harrier size. In the 14th century Chaucer mentions in his Canterbury Tales the "Small Houndes" belonging to the Prioress, and in the 15th century the name Beagle was used for the first time by several writers. In Tudor times, Queen Elizabeth 1st had a pack of "Singing Beagles", a name inspired by their cry which is still used today. These Beagles were also supposed to have been small enough to fit inside a lady's gauntlet. Another Royal reference came from James 1st who referred to his wife as his "Dear little Beagle", apparently as a term of affection!
​
No names appear to have been given by the Greeks, Romans, Saxons or Normans to their small hunting hounds. In the 11th century the name Kennetty was used to refer to hounds of similar size to the Beagle; Rache was also used at about the same time but this was thought to refer to the larger hounds of Harrier size. Hayreies and Hayrers were names given in the 15th century for harrying game, those names becoming Harrier sometime during the next century. The first recorded use of the name Beagle appears to be about 1475 in "The Squire of Low Degree" in which it is written:

* Any omissions are unintentional & due to lack of information
Source - thebeagleclub.org

The history of the Beagle (Part 2)

We know very little about the early history of the Beagle in South Africa save that D'Urban & Walter Dyason exhibited them first at the Port Elizabeth Shows in 1883 & 1884. It was on the 13th March 1895 that the first Beagles were registered by the then South African Kennel Club (now KUSA), Venus (507) & Ajax (508) both by Ajax out of Flora and owned by a Mr Wilmot. Although the records show that Beagles won Championship points in the early years of the century none of them achieved the necessary 12 points needed to become a Champion. This honour was left to two litter mates Mrs K C Fyfe's  Mr Jorrick Juggins of Leasorleigh (139978) and Mr E W Robinson's Mr Jorrick Jupiter of Lisrob both by Ch Barvae Viking out of Barvae Tulip, the breeder was Mrs Mrs J Dales. Barvae being a well known UK breeding kennel of the time. The long gap is not surprising as the available statistics do not show any KUSA Beagle registrations between 1934 and 1948. Also remembering that UK breeding stock was almost completely decimated during WW1 and that the Kennel Club (UK) registrations in 1931 were 27 and in 1945 just 1 dog and it was from the UK that imports came to South Africa.
​
Being a British breed, the foundation stock of Beagles was and is largely drawn from the UK. However importation of dogs from Australia, where shorter legged Beagles are favoured and the United States, which has a different breed standard to the UK & South Africa has resulted in two distinct types of Beagles in South Africa. The British breed type remains the standard of the UK & South Africa.

The Beagle is now well established in South Africa, with the Beagle Club of the Transvaal being formed in the 1980's, with its first Championship Show judged by Sylvia Tutchener of Beacott Beagles UK. This club flourished for over a decade but the number of established breeders dwindled during the period 1993 to 2005 due to emmigration and death. The fortunes of the Beagle Club of Transvaal waned due to diminishing numbers and differences between breeders, and as result, sadly by 2008 had ceased to exist to the detriment of the breed. 2008 was a low point for Beagles in South Africa with the average number of Beagles entered at Championship Shows just 3, however during the ensuing years the numbers of Beagles being exhibited have gradually increased with the current average being 15. In the meantime breeders particularly unregistered breeders, backyard breeders and puppy mills have proliferated, most of whom are doing the breed a disservice, with the result that Beagles are now in the top ten of the most registrations in South Africa, a position which seldom does any breed any good. Hence the formation in 2013 of the Beagle Association of Gauteng whose prime aim is to protect the breed and to promote responsible & ethical breeding.

Beagles imported during the last fifty years include Ch Deanery Dream Time of Towri, Ch Raimex Phaedra  of Tanqueray, Ch Raimex Phoenix of Tanqueray, Ch Crestamere Hot Spur of Isibindi Ch Tragband Too Darn Hot to Handle by Rossut, Dufosse Lady Bee of Cherive, Rossut Annabel of Cherive,  Ch Newlin Quentin of Beacott, Ch Serenaker Love Me Do of Pinoak,  Ch Rossut Junket of Pinoak,  Ch Fallowfield Lotti of Pinoak all from the UK. Ch Kings Court Kennels of Towri from Germany, CH Starbuck Torbay Thunder of Towri, Milroc Voxcreek I'm on Fire from the States; Dargavan Dictator of Towri, Ch Donlee Talisman of Towri, Ch Brialey for Your Eyes Only of Cherive, Ch Brialey Live & Let Die of Voxcreek from Australia, Sarangrave Ur Throne Awaits from New Zealand, Je Suis Precieuse Bisous dela Meut dÁsterion from France and Chester the Smart Hunting of Cherive from Hungary. All these Beagles have impacted on the breed one way or another. To date the most prolific winner has been the UK import, Pete or Ch Tragband Too Darn Hot to Handle by Rossut, owned by John & Wendy Streatfield and expertly handled by Jack Peden. Perhaps the biggest influence in these years have been the numerous imports by Margot Anderson of Towri Kennels from the States, Australia & Germany which have had both a positive and  a negative effect on the breed in Soth Africa. *

Other Beagles have been imported recently, a number coming from Eastern European countries, but as they are never seen in the showring there are no means to evaluate their quality and merits/demerits. Some of these may be responsible for the unrecognised/not permitted colours, such as chocolate & liver, currently being touted on the internet as "rare"& "desirable". 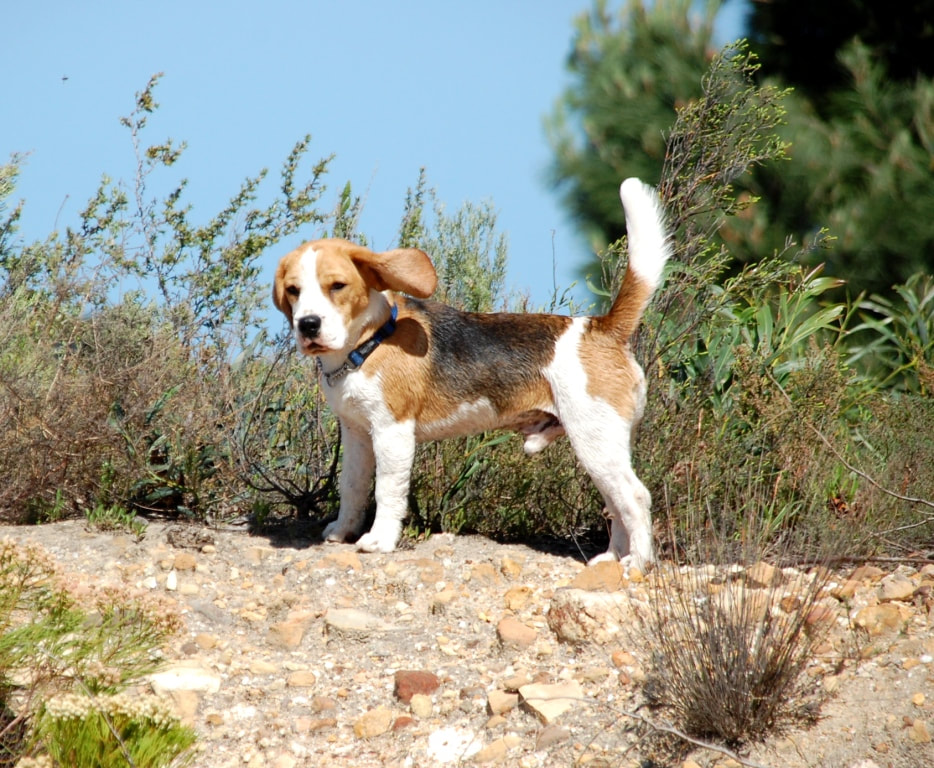